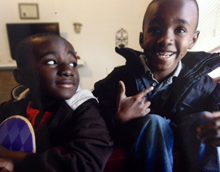 7-year-old Michael had recently moved in with his grandmother because his parents could not care for him. A few years earlier, his family had been homeless; now, suddenly, his parents were not in his life. As a result, Michael began having repeated angry outbursts in his first grade classroom and was at risk of being expelled. Michael’s doctors at Cincinnati Children’s Hospital had diagnosed him as having ADHD and were trying to determine whether he also had PTSD. His grandmother did not know where to turn. Then, a social worker at the Children’s Fairfield pediatric clinic referred Michael to Child HeLP. A Legal Aid attorney helped Michael’s grandmother ask the school to evaluate Michael for special education and counseling services and represented her at the school meetings. As a result of Legal Aid’s advocacy, Michael began receiving the special education services he needed. Michael is learning to cope with frustration, his behavior is improving, and he is now in a better position to learn and be successful in school.